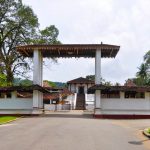 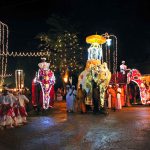 The Sabaragamuwa Maha Saman Devalaya is considered the main Devalaya of deity Saman except for the Shrine at top of Sri Pada.

The history speaks of a temple at Ratnapura area since the time of king Dutugemunu of Anuradhapura Kingdom, But the recent history starts from Dambadeniya period.

A court Minister called Aryakamadeva had come over to Ratnapura to make a vow for gemming, and if lucky to build a Devalaya to keep God Sumana Saman’s statue. After a sucessful gem mining expedition, he is said to have built the first devalaya dedicated to God Saman at Ratnapura. Although the devalaya was highly influenced by Hindu culture, it remained a Buddhist place of worship throughout the years.

A Buddhist moule by the name of Ven. Seelawansa had been on a pilgrimage to Adams peak. One night he receives a strange message more in the from of a dream about a statue kept in a rock cave in the wilderness. Deciding to follow this message the ven monk found the statue which was of God Sumana Saman. It was brought in a  procession to Sapagrama Viharaya.It is mentioned in the ‘Saman Siritha’ that there after Saparagrama Viharaya was named Saman Viharaya.Before the reign of King Rajasinghe of Sitawaka Sumana Saman Dewalaya had been in the control of the Portuguese.For 40 years the Portuguese controlled the Holy land temples, slupas, statues and all Valuable relics and treasures were destroyed. King Rajasinghe of Sitawaka was successful in restoring this damage and he rebuilt the Saman Devalaya owing to strong Hindu influence Saman Viharaya Could not be completed. After 40 years King Rajsinghe held the Saman Dewala Perahera.